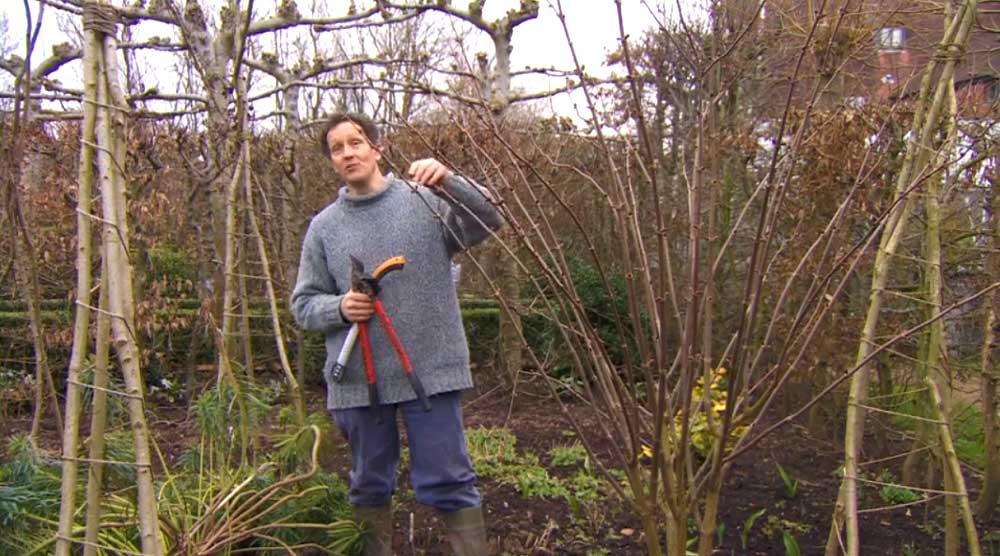 Gardeners’ World episode 1 2013: The first signs of spring herald the start of the new gardening year and the start of a new series of Gardeners’ World. In the seasons to come, Monty Don will be in his garden, Longmeadow, and along with Carol Klein, Joe Swift and Rachel de Thame, will have a host of practical tips and inspirational ideas to help viewers improve their gardens.

Monty Don reveals the changes he has made to his garden over the winter, tackles timely pruning tasks and shows us the best way to lay a new path. Snowdrops are lighting up the winter garden and Carol is out and about in Oxfordshire celebrating their staggering diversity and the length to which some gardeners will go in order to get their hands on the latest varieties.

Rachel visits Cambridge Botanic Garden, which has one of the country’s most celebrated winter gardens, to find inspiring plants and planting combinations that not only look fabulous now but that can also provide year round interest.

Over the next few weeks Joe will be helping viewers achieve the garden of their dreams by offering up simple planting design plans for four very different styles of garden. He starts off with the romance of a cottage garden.

The right path adds structure and permanence to a garden as well as being really useful for access. Monty used reclaimed bricks to create a rustic looking path in the Writing Garden at Longmeadow but new bricks are readily available.

To build a brick path, excavate a trench at least 20cm deep, fill with a 10cm base of finely broken up rubble and tamp down firmly. For laying bricks of uniform shape and size, top with about 5cm of sand and level off to create a smooth flat surface for laying the bricks on. For uneven sized bricks, like the ones Monty used, sand can be added bit by bit in order to adjust the depth under each brick.

To ensure your path is level, pegs hammered into the ground act as a good guide for the depths of rubble and sand. For straight paths, boards make useful edging; for curving paths, mark out your edges first (hosepipe makes a useful guide) and cement in bricks along each edge. Then infill with bricks placed on sand. With reclaimed bricks, Monty found laying one edge, infilling and then laying the other edge avoided the problems caused by their uneven widths.

Finish by brushing coarse sand or a dry mortar mix into the cracks. After rain, more may be needed to top up.Winter is a good time to tackle these projects before the beds and borders burst into life and need lots of attention. Take care to cover up freshly mortared bricks in wet or frosty conditions to ensure the cement sets firmly.

Autumn-fruiting raspberries produce their fruit on the current season’s growth. To prune, cut all stems down to the ground now and then mulch the area with garden compost. Over the next few weeks new shoots will appear; these will form new canes which will produce flowers and then fruit from late summer onwards.

Late-flowering clematis, such as Clematis viticella should be pruned now as they come into growth. If your Clematis starts flowering in July or August, it is a late-flowering type (often called group 3). Cut all the twiggy stems down to new green buds or shoots near the base. Remove all the top growth and the remaining buds will produce a mass of new shoots which should be smothered in flowers later in the year.

There’s no hurry to sow seed but if you are going to get started then begin with chillies, peppers and celeriac which are all slow to germinate and need a long growing season to do well. Sow seed in a seed tray or pot filled with multipurpose or seed compost and cover thinly. Place in a warm place, such as a heated propagator or sunny windowsill, to germinate.

Few garden plants will survive waterlogging or flooding. Prolonged periods of sitting in soil saturated with water reduces the oxygen available to the roots and causes yellow leaves, root rot and death. However, conditions can be improved using various techniques to promote drainage and prevent damage.

Soils become waterlogged when water is unable to drain away. This leaves no air spaces in the saturated soil, and plant roots literally drown. Waterlogging is common on naturally poorly drained soils or when heavy soils are compacted. Short-lived flash floods after a downpour seldom harm most plants. It is prolonged, saturated soil that cause the most damage as the oxygen is used up by the plant roots and soil microorganisms.

Flooding from overflowing drains can add the complication of sewage and waste water, especially if growing edible crops.

When some shrubs are pruned hard, they regrow vigorously producing more colourful stems that brighten up the garden in winter. Others can also be hard-pruned to create a large-leaved effect. These methods, when applied to trees, are often called coppicing and pollarding, but when applied to small shrubs the term ‘stooling’ is commonly used. Such plants fall into RHS Pruning group 7.

Late winter (February) or early spring (March), before the leaves begin to appear on the stems, is traditionally considered the best time to prune. However, to allow the maximum time to enjoy colourful stems, shrubby Cornus and willows are now typically pruned from late March to mid-April, just as the new growth is developing.

Plant roots and shoots are in balance and, after hard pruning, plants will regrow to re-establish this balance. It is important to prune in the dormant season as the plant resources are largely in the roots and can be used for the required vigorous regrowth. If pruned in summer, plant resources – which, by this time, are predominantly found in the leaves – will be removed, and regrowth will be less strong.

Gardeners’ World episode 1 2013: The first signs of spring herald the start of the new gardening year and the start of Gardeners' World 2013.