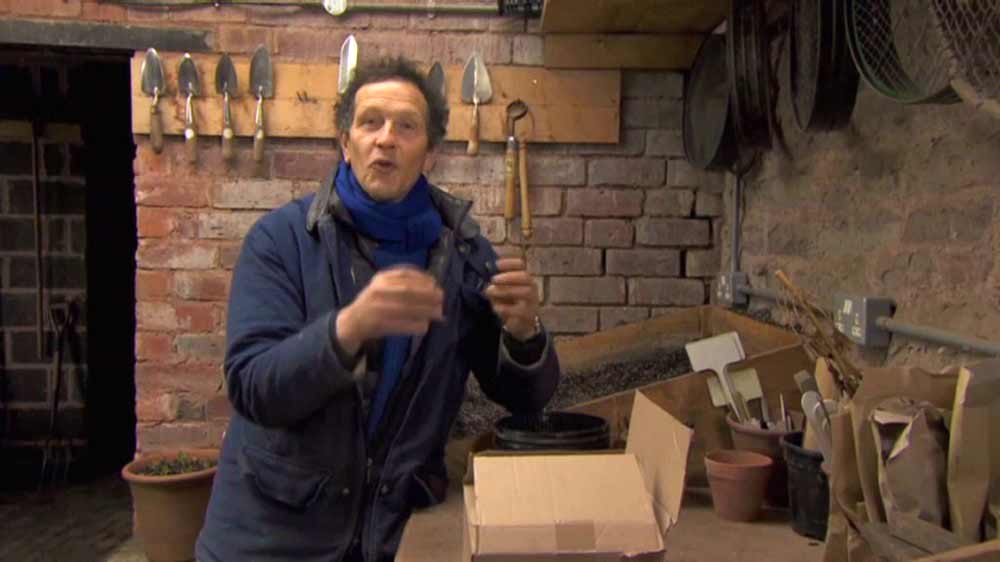 Gardeners’ World episode 5 2013: Monty Don shows us how to plant pots of bulbs for fabulous summer colour. Rachel de Thame shares her passion for rare plants looking at a relative new comer to spring gardens, the hepatica. These delightful little flowers come in a huge range of colours and sizes and Rachel meets a collector who has travelled far and wide in search of new varieties.

Back at Longmeadow, Monty is in his vegetable patch hoping that his soil is warm enough to plant the first potatoes of the year.

Monty planted two white hydrangeas in his Writing Garden: Hydrangea macrophylla ‘Veitchii’ and Hydrangea paniculata ‘Floribunda’. The first is a classic lacecap hydrangea with very flat flowerheads while the second has much larger, upright panicles and usually flowers for longer.

Both these shrubs will provide the grace and elegance that Monty wants to achieve because, unlike traditional mophead hydrangeas, their flowerheads are made up delicate mix of small flowers and showy bracts. There are many other great white hydrangeas to choose from, including Hydrangea macrophylla ‘Lanarth White’, Hydrangea paniculata ‘Grandiflora’, Hydrangea arborescens ‘Annabelle’ and Hydrangea serrata ‘Beni-gaku’.

Mike Bell, who holds the National Collection of Phyllostachys and is President Emeritus of the Bamboo Society, prizes a smaller, delicate bamboo called Borinda nujuangensis but this is not yet available to gardeners.

Bamboos can be very invasive, particularly the ones that spread with long underground stems, so these are best confined to a sturdy container such as the galvanised metal cattle trough that Monty uses. Mike Bell’s collection contains two particularly invasive specimens Sasa kurilensis and Qiongzhuea tumidinoda which are best avoided by gardeners.Bamboo naming can be complicated and some less well known forms may be sold with different names. Qiongzhuea tumidinoda is often called Chimonobambusa tumidissinoda and Phyllostachys vivax ‘Huanwenzhu inversa’ (pictured above) may also be known as Phyllostachys vivax f. aureocaulis ‘Huanwenzii inversa’.

Avoid fungal diseases, such as damping off, in your greenhouse by making sure your pots and seed trays are really clean before you use them. Give them a thorough scrub with water and leave to dry. Monty uses cold running water in his sink outside but warm water and washing up liquid does a great job too.

It’s important to keep all tools which are used for cutting as sharp as possible. With secateurs a good way to do this is to draw a line along the cutting edge and then gently remove it with a whetstone. Then turn them over and remove the burr to leave a sharp edge. Shears, hoes and spades can also be sharpened this way.

Now is the time to plant onions and shallots from sets. If your soil is starting to warm up, they can be planted directly into the ground but Monty’s clay soil is still cold and wet so he’s planted them into plugs to get them started. Fill a plug tray with compost and then insert each shallot so it is half buried in a plug. Put them somewhere protected and they’ll get growing quickly. Plant them out once they have a green shoot and some roots and the soil is warmer.