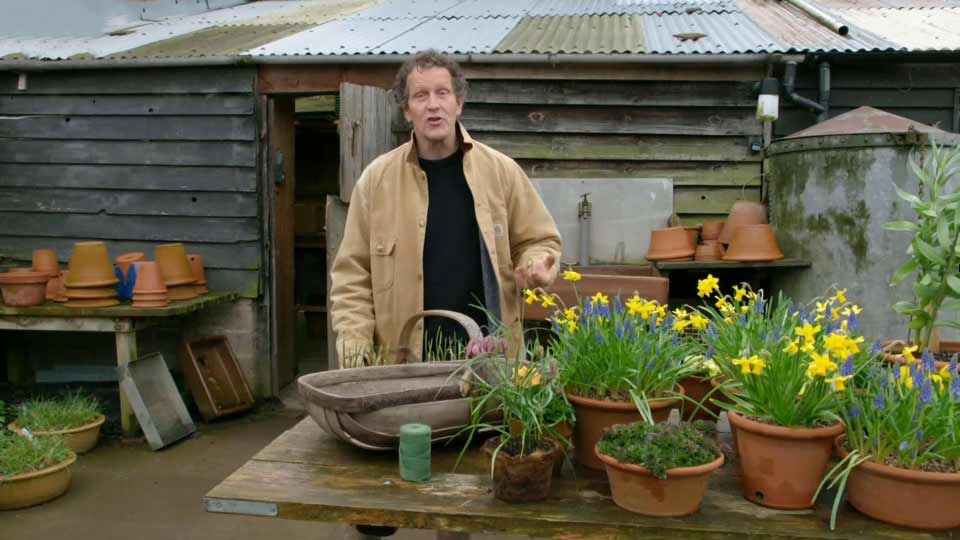 Gardeners’ World episode 2 2013: Monty Don revels in his passion for roses as he sets about planting some bare root varieties in the Jewel Garden at Longmeadow in readiness for a colourful spring and summer. Continuing the rose theme, there is an inspirational visit to the magnificent formal rose garden of Hever Castle in Kent, home to a breathtaking collection of hybrid teas.

Carol Klein is in her Devon garden at Glebe Cottage, where she is delighting in the seasonal scent of her mahonias, while describing their exotic and dramatic history. And Joe Swift continues his planting design series by sharing ideas and top tips on the different types of plants to choose when creating a contemporary garden.

Monkshood, the herbaceous perennial Monty lifted and divided in his garden, is also known as the Queen of poisons. All parts of the plant are highly poisonous and we would strongly advise that you cover up your skin and wear gloves whenever you handle this plant. This is because the main toxin, aconitine, can be absorbed through the skin. Having said this, it is a beautiful plant to have in your garden and we wouldn’t want to put you off growing it!

Hybrid tea roses have large flowers borne singly on long, sturdy stems. They come in a wide range of colours and bush varieties have a stiff, upright habit. The majority of them are strongly scented and they make great cut flowers. Neil Miller, the rose enthusiast we went to see at Hever Castle, has grown quite a few different varieties over the years.

The window for buying bare-root roses is rapidly coming to an end, so if you fancy buying a new rose for your garden, don’t delay in placing your order. They’re available from mail-order suppliers which you can find online. Failing that, look out for container-grown specimens in garden centres over the coming months.

A contemporary garden, by definition, has a modern feel about it. Strong, hard landscaping plays a major role and plants are often planted in bold blocks to complement it. When designing this type of garden, Joe likes to limit himself to a handful of plants and, in his design shown above, he only uses a total of nine.

It’s time to get your dahlia tubers out of store and check them over. If they’ve dried up, they’ll have to be discarded. If the mice have got to them, that won’t do them any good either. But if they’re nice and plump, pot them up and put them somewhere warm and light to start them into growth.

Rhubarb is now starting to grow strongly. If you have any plants that are beginning to stir, it’s a good idea to force them. Cover them up with an upturned bucket, an old chimney pot or anything that will block out the light. The stems will grow long and thin as a result and, most importantly, will taste much sweeter than normal.

Leeks need to be sown now. This may seem early, but they’re slow to develop and have a long growing season. Monty likes to sow them in pots so that the roots don’t get disturbed. Fill each pot with multi-purpose compost and sprinkle the seeds over the surface. Cover them lightly with a bit more compost, give them a drink and keep somewhere sheltered. They don’t need any heat, so a cold frame or a windowsill in a spare room would be perfect.

Roses can be expensive plants, but they last for many, many years and are easy to establish if you follow a few simple steps on planting and aftercare. Depending on the time of year you purchase your roses, you will have a choice of types of roses:

Bare-root roses: These are only available from about November to March usually mail order. These are plants dug from open ground and packed to prevent the roots drying out before sale. Bare-root plants are usually good quality, having a wider root spread than containerised plants, and they are often good value. They should be planted as soon as received, or if ground conditions are unsuitable, unpacked and kept in a container of slightly moist compost and planted as soon as conditions allow.

Containerised roses: These are at their best in garden centres from about November to March. They may be available to buy like this for longer into the spring and summer, but quality starts to suffer the longer they are kept on display. They are bare-root roses placed in pots of potting media to prevent them drying out. They should be planted as soon as received.

Container-grown roses: These are available all year round. These are roses that have been grown in containers for a whole growing season or more. They can be planted at any time, (but are usually not such good plants as bare root ones) and are comparatively costly.

Gardeners’ World episode 2 2013: Monty revels in his passion for roses as he sets about planting some bare root varieties in the Jewel Garden