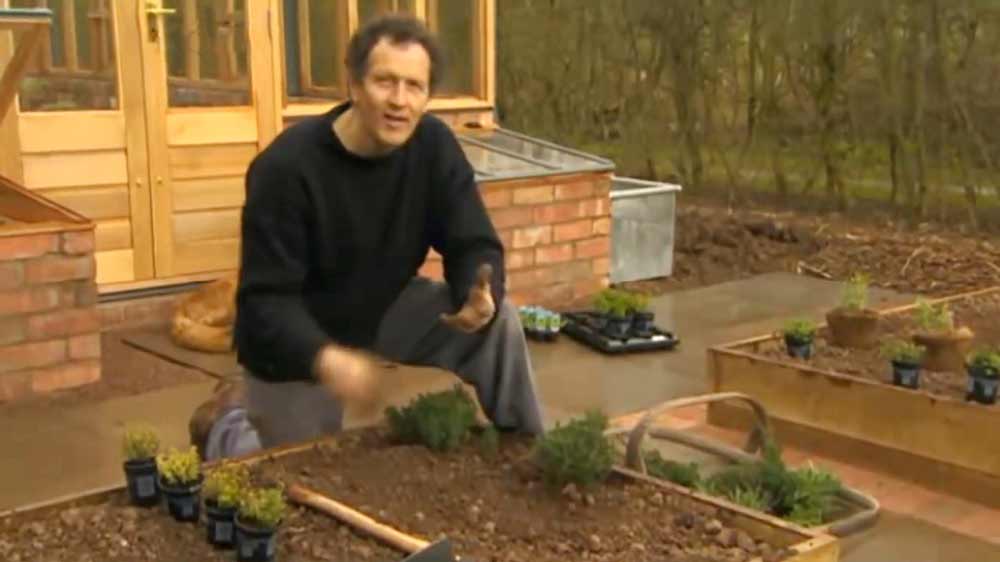 Gardeners’ World episode 7 2013: This week on Gardeners World, Monty Don is searching for signs of our long-delayed spring in his garden at Longmeadow. Taking inspiration from his trip to RHS Garden Wisley last week, he will be planting up an alpine trough.

Carol Klein is out and about looking at native celandines, Wordsworth’s favourite flower; they grace our hedgerows and woods at this time of year. The wild strains are too invasive for most domestic gardens but Carol finds a number of cultivated varieties that should suit most of us.

And, if its colour you are after, then enjoy a sneak preview of summer when we visit agapanthus enthusiast, Michael Dedman, in his Essex garden to see his prized collection of these beautiful African lilies at their very best. Back at Longmeadow, Monty’s hoping the soil will have warmed up enough to finally allow him to plant his potatoes.

Mediterranean herbs such as rosemary, sage and thyme need sharp drainage and full sun to thrive. Monty’s garden has a heavy clay soil so he has built four raised beds in a sunny position and really improved the drainage with a layer of crocks and stones, some stony subsoil and a layer of top soil with grit added.

Monty propagated his own herbs from cuttings and division in July. They’ve been growing in the greenhouse border through the autumn and winter and are now strong, healthy plants with large root systems. He also plans to plant lemon thyme, French tarragon, margoram and many more.

Agapanthus are perennial plants which come from southern Africa. In the UK they do well in sheltered gardens with free draining soil but they rarely thrive in heavy soils which become cold and wet. Agapanthus can be herbaceous (dying back in winter) or evergreen and there are many hybrids that lie somewhere in between, keeping some of their leaves over winter, if conditions allow. The herbaceous ones are the hardiest while the semi-evergreen types tend to get more damaged by cold and wet in winter.

The clay soil at Longmeadow means growing Agapanthus in the borders is difficult, so Monty grows his in pots. He brings them into the frost free greenhouse over winter to give them protection from the worst of the weather but takes them out in spring to make space in the greenhouse. Michael Dedman’s garden in Essex is sheltered with a light, sandy soil so many of his Agapanthus can be planted out in the garden year round while others are grown in pots and moved into a greenhouse over winter. Michael recommends three of his favourite Agapanthus, ‘Queen Mum’, ‘Mood Indigo’ and ‘Phantom’.

Look out for slugs and snails

This is the time of year when slugs and snails wreak havoc in the garden. The best way to deal with this is prevention rather than cure. Try to keep an area in the garden where vulnerable plants are protected from slugs and snails. Look through this area regularly, checking under pots and trays to find any slugs or snails that have made their way in. If you find any, collect them up and dispose of them as you see fit.

Now is the time to plant potatoes. Dig a trench roughly 6 inches deep and line the bottom with compost. Place the potatoes, eye-end uppermost into the trench, spaced at least 1 foot apart. Draw soil up over the potatoes to cover them and create a ridge in which the tubers will form. Keep rows 2 or 3 foot apart so that there is enough room for earthing-up over the coming months. You should be enjoying your first potatoes sometime in July.

Sow any member of the cucurbit family now and they’ll be ready for planting out when the last frosts have passed, at the end of May or beginning of June. The cucurbit family includes courgettes, cucumbers, melons, squash and pumpkins. Sow the large flat seeds either singly in plugs or two per small pot (you can remove the weaker seedling once they emerge). Place pots in a warm position to germinate, where the temperature is about 20°C.

Don is known for writing and presenting his own series. In 2005, he setup a 6-acre (2.4 ha) smallholding in Herefordshire so a group of young drug offenders could work the land. The project was documented for the BBC series Growing Out of Trouble, airing in 2006. This was followed by the ambitious BBC series Around the World in 80 Gardens in 2008, where Don visited eighty gardens of a variety of styles worldwide. In 2010, Don presented My Dream Farm, a Channel 4 series which helped people learn to become successful smallholders, and Mastercrafts, a BBC series which celebrated six traditional British crafts. Monty Don’s Italian Gardens aired on the BBC in 2011, which was followed by Monty Don’s French Gardens, in 2013. Later that year, Don presented an episode of Great British Garden Revival. In 2014, Don became the lead presenter for the BBC’s flagship Chelsea Flower Show coverage, again replacing Titchmarsh.

Gardeners’ World episode 7 2013: This week on Gardeners World, Monty Don is searching for signs of our long-delayed spring in his garden.