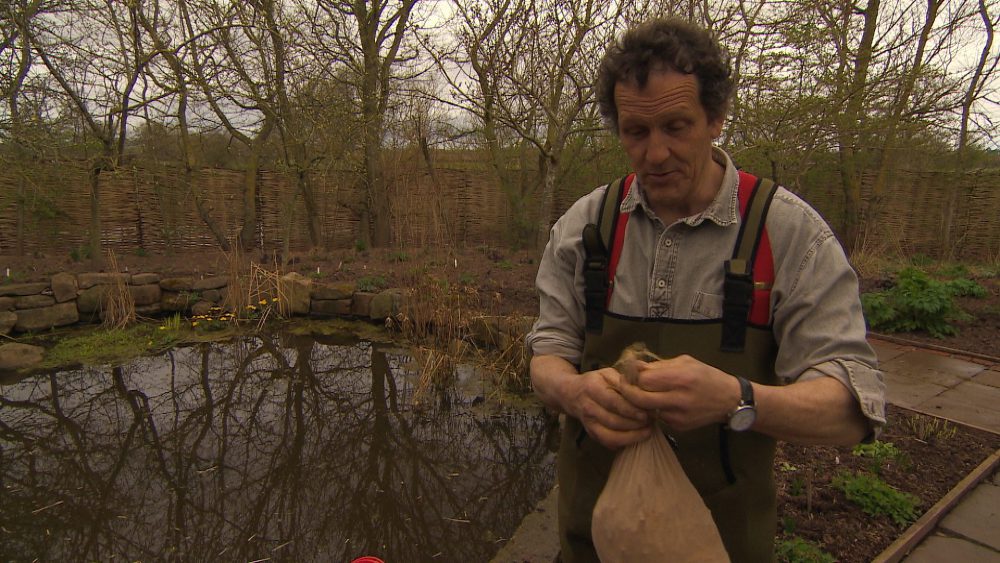 Gardeners’ World episode 8 2013: Monty Don makes a start on turning his vegetable patch into a cottage garden. He also tackles the blanketweed that has taken over his pond, and plants a grapevine to train through a hole in the wall of his new greenhouse.

Meanwhile, Carol Klein is at Glebe Cottage in Devon where she reveals a little of the fascinating history of one of our woodland gems, the trillium. And Joe Swift travels to Swansea to explore a wonderful suburban garden with a charm all of its own.

If you live south of a line drawn from The Wash to Pembroke, there’s a good chance you’ll be able to grow a decent crop of dessert grapes outside. Your chances of success will be greatly increased if you grow them against a warm, sunny wall. North of this line, it’s best to grow them under glass. The variety you choose will make a big difference too. Here are our top 10 recommendations, including some dual-purpose varieties that could be used to make wine as well.

Now the soil is starting to warm up, it’s time to sow carrots. They must be sown direct, preferably in soil that has not been freshly manured. Either sow them in a line or broadcast them across the surface, making sure you don’t sow too thickly. Give them a light rake along with a quick water and that’s it!

Sweet peas are easy to raise from seed and, within a matter of months, will fill a summer border with deliciously scented, colourful blooms. But if your pot-grown seedlings are looking a bit straggly at the moment, don’t despair! Simply nip out the growing tips and they’ll soon recover. And what’s more, you’ll end up with nice bushy plants and more flowers for your money.

If you have a favourite dahlia you’d like more of, then now’s the time to take cuttings. When the shoots are about 7.5cm (3in) long, cut them below the surface of the compost with a sharp knife and remove the lower leaves. Insert around the edge of a small pot filled with a 50:50 mix of compost and perlite. Give them a drink, place a clear plastic bag over them and keep somewhere warm. With luck, they will root within a matter of weeks.

Don is known for writing and presenting his own series. In 2005, he setup a 6-acre (2.4 ha) smallholding in Herefordshire so a group of young drug offenders could work the land. The project was documented for the BBC series Growing Out of Trouble, airing in 2006. This was followed by the ambitious BBC series Around the World in 80 Gardens in 2008, where Don visited eighty gardens of a variety of styles worldwide. In 2010, Don presented My Dream Farm, a Channel 4 series which helped people learn to become successful smallholders, and Mastercrafts, a BBC series which celebrated six traditional British crafts. Monty Don’s Italian Gardens aired on the BBC in 2011, which was followed by Monty Don’s French Gardens, in 2013. Later that year, Don presented an episode of Great British Garden Revival. In 2014, Don became the lead presenter for the BBC’s flagship Chelsea Flower Show coverage, again replacing Titchmarsh.