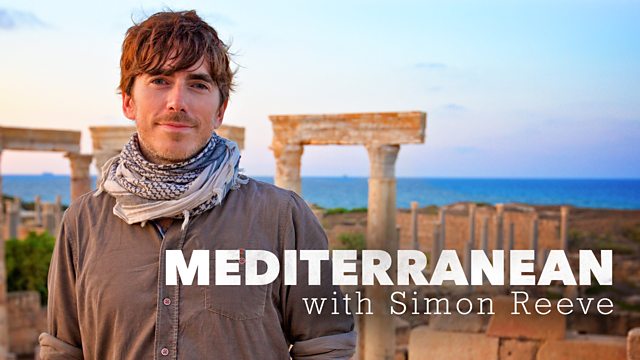 Simon Reeve embarks on the first leg of his epic four-part journey around the Mediterranean. At the centre of this great sea, and surrounded by crystal clear waters, is Simon’s first stop, the beautiful island of Malta. Driven by a surge of tourists, modern-day Malta is booming. But beneath the picture-postcard image lies a country accused of being a haven for money laundering and organised crime, where journalists can be murdered by car bombs.

When Simon takes a ferry to his next destination, Calabria in southern Italy, he discovers a region in the grip of Europe’s most powerful mafia, the ‘Ndrangheta. With rare access to police and customs investigators, Simon follows an armed convoy carrying a ton of seized cocaine, joins a stakeout of a high-level suspect, and crawls through a huge underground warren of tunnels and bunkers built by fugitive mafia bosses. Travelling east along the southern tip of mainland Italy, Simon visits a turtle conservation centre, meeting Raoul, a loggerhead turtle rescued after swallowing huge quantities of plastic, a massive and increasing threat to Mediterranean wildlife. Simon helps release him back into the sea.

Taking the overnight ferry from the heel of Italy, Simon arrives in one of the least-known but most beautiful corners of the Mediterranean, Albania. Under communist rule, Albania was isolated and shut off from most of the world. In a country now hoping for EU membership, Simon discovers an ancient culture of vendetta, where if an adult commits a crime, a child can be killed in revenge. Simon ends the first leg of his journey at a spectacular wildlife reserve where bird life is now recovering following the country’s groundbreaking ban on hunting.

Simon Alan Reeve is a British author and television presenter, currently based in London. He makes travel documentaries and has written books on international terrorism, modern history and his adventures. He has presented the BBC television series Tropic of Cancer, Equator and Tropic of Capricorn.

Simon Reeve embarks on the first leg of his epic four-part journey around the Mediterranean.