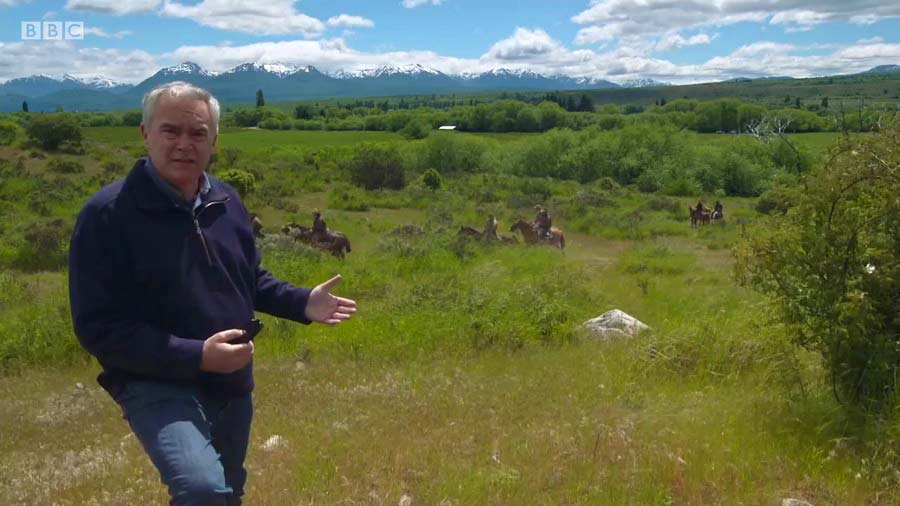 Patagonia with Huw Edwards: Huw Edwards fulfils a lifelong dream to explore Patagonia, and the unique attempt to preserve Welsh culture by isolating a Welsh community in one of the most remote and inhospitable places on earth.

A hundred and fifty years after the pioneers arrived, Huw meets their descendants and asks what remains of the culture the forefathers wanted to safeguard.

Patagonia is a sparsely populated region at the southern end of South America, shared by Argentina and Chile. The region comprises the southern section of the Andes Mountains, lakes, fjords, and glaciers in the west and the deserts to the east. Patagonia is bounded by the Pacific Ocean on the west, the Atlantic Ocean to the east, and many bodies of water that connect them like the Strait of Magellan, the Beagle Channel, and the Drake Passage to the south.

Human habitation of the region dates back thousands of years, with some early archaeological findings in the area dated to at least the 13th millennium BC, although later dates around the 10th millennium BC are more securely recognized. Evidence exists of human activity at Monte Verde in Llanquihue Province, Chile, dated to around 12,500 BC. The glacial-period ice fields and subsequent large meltwater streams would have made settlement difficult at that time.

The region seems to have been inhabited continuously since 10,000 BC, by various cultures and alternating waves of migration, the details of which are as yet poorly understood. Several sites have been excavated, notably caves such as Cueva del Milodon in Última Esperanza in southern Patagonia, and Tres Arroyos on Tierra del Fuego, that support this date. Hearths, stone scrapers, animal remains dated to 9400–9200 BC have been found east of the Andes.