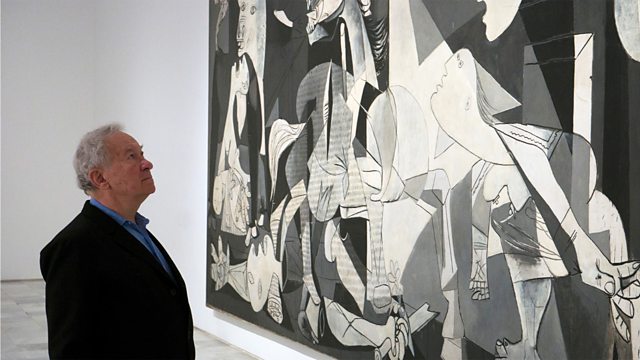 Simon Schama’s History of Now episode 1: In his most personal project to date, Simon Schama looks back at the dramatic history that has played out in his lifetime. Best known for writing history, he has lived a fair bit of it too. Born in 1945, on the night of the bombing of Dresden, Simon grew up as part of a generation determined to rebuild the world from the ashes of war. In this film, he reveals the stories of artists and writers who have been at the forefront of the fight for truth and democracy, often at great personal cost.

Simon opens the film with Picasso’s Guernica. Painted in 1937, in response to the bombing of a small town by the Nazis in the Spanish Civil War, no work of art has so powerfully captured the true horror of civilian bombings. Ever since, Picasso’s masterpiece has stood as a testament to the power of art to preserve the historical record and to speak truth to power.

Picasso wasn’t the only artist drawn into the conflict. In December 1936, a tall young Englishman headed to Spain to join those risking their lives for freedom. His name as Eric Blair, better known as George Orwell. We join his son Richard Blair in Barcelona, to tell the story of how a campaign of misinformation waged on the Spanish left by Stalin, cost the lives of many of Orwell’s friends and comrades. The sense of betrayal never left him and fed into the creation of his literary masterpiece 1984.

As the Cold War confrontation between freedom and totalitarian oppression intensified, Simon shows how the most powerful plea for the necessity of a free life came from inside the Soviet Union, in Boris Pasternak’s epic novel Dr Zhivago. With free and independent thought in Russia under assault once again, Simon meets Nadya Tolokonnikova, founding member of the punk collective Pussy Riot. Travelling to Prague, Simon explores how artists and writers in Czechoslovakia provided a powerful blueprint for cultural resistance 1960s and 70s. The film ends with an encounter with artist Ai Weiwei, who reveals his deeply personal journey towards becoming one of the world’s most famous dissident artists.

Sir Simon Michael Schama is an English historian specialising in art history, Dutch history, Jewish history and French history. He is a University Professor of History and Art History at Columbia University, New York.He first came to public attention with his history of the French Revolution titled Citizens, published in 1989. In the United Kingdom, he is perhaps best known for writing and hosting the 15-part BBC television documentary series A History of Britain broadcast between 2000 and 2002

Guernica is a large 1937 oil painting by Spanish artist Pablo Picasso. It is one of his best-known works, regarded by many art critics as the most moving and powerful anti-war painting in history. It is exhibited in the Museo Reina Sofía in Madrid.

The grey, black, and white painting, on a canvas 3.49 meters (11 ft 5 in) tall and 7.76 meters (25 ft 6 in) across, portrays the suffering wrought by violence and chaos. Prominent in the composition are a gored horse, a bull, screaming women, a dead baby, a dismembered soldier, and flames.

Picasso painted Guernica at his home in Paris in response to the 26 April 1937 bombing of Guernica, a Basque Country town in northern Spain which was bombed by Nazi Germany and Fascist Italy at the request of the Spanish Nationalists. Upon completion, Guernica was exhibited at the Spanish display at the 1937 Paris International Exposition, and then at other venues around the world. The touring exhibition was used to raise funds for Spanish war relief. The painting soon became famous and widely acclaimed, and it helped bring worldwide attention to the 1936-1939 Spanish Civil War.

Simon Schama's History of Now episode 1: In his most personal project to date, Simon Schama looks back at the dramatic history that has played out in his lifetime.