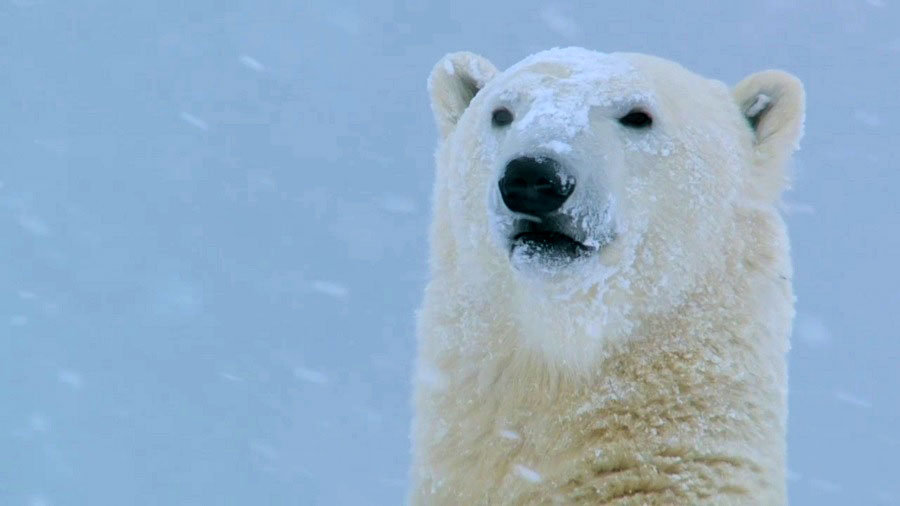 Snow Animals: Liz Bonnin introduces a cast of charismatic animals to reveal the remarkable strategies they use to survive, and even thrive, in winter.

For animals this is the toughest time of year, and preparations start early. In autumn, Siberian chipmunks collect food in their cheek pouches to stockpile in their burrows, while caribou make an epic journey to new feeding areas away from the worst weather. With the arrival of winter, the American bobcat has to find its prey beneath deep snow, while an Arctic fox must sniff out its very own frozen ready meal. A sea otter mum keeps her cub warm by blowing air into its coat, while some animals turn white to blend in with the snowy world around them.

As winter begins to loosen its grip, an Arctic ground squirrel stirs from an eight-month hibernation and has to woo its mate in just twelve hours, and baby animals emerge to play in the snow before spring’s imminent arrival. Along the way, Liz meets some of our most iconic winter animals to uncover the secrets behind their seasonal success stories.

The Siberian chipmunk or common chipmunk (Eutamias sibiricus) appears across northern Asia from central Russia to China, Korea, and Hokkaidō in northern Japan. The Siberian chipmunk was imported from South Korea and introduced in Europe as a pet in the 1960s. It is the only chipmunk found outside North America, and this animal is classed either as the only living member of the genus Eutamias, or as a member of a genus including all chipmunks.

The reindeer, also known as the caribou in North America, is a species of deer with circumpolar distribution, native to Arctic, sub-Arctic, tundra, boreal, and mountainous regions of northern Europe, Siberia, and North America. This includes both sedentary and migratory populations. Rangifer herd size varies greatly in different geographic regions.

The Taimyr herd of migrating Siberian tundra reindeer in Russia is the largest wild reindeer herd in the world, varying between 400,000 and 1,000,000. What was once the second largest herd is the migratory boreal woodland caribou (R. t. caribou) George River herd in Canada, with former variations between 28,000 and 385,000. As of January 2018, there are fewer than 9,000 animals estimated to be left in the George River herd, as reported by the Canadian Broadcasting Corporation. The New York Times reported in April 2018 of the disappearance of the only herd of southern mountain caribou in the lower 48 states, with an expert calling it “functionally extinct” after the herd’s size dwindled to a mere three animals.

The Arctic fox (Vulpes lagopus), also known as the white fox, polar fox, or snow fox, is a small fox native to the Arctic regions of the Northern Hemisphere and common throughout the Arctic tundra biome. It is well adapted to living in cold environments, and is best known for its thick, warm fur that is also used as camouflage. In the wild, most individuals do not live past their first year but some exceptional ones survive up to 11 years. Its body length ranges from 46 to 68 cm, with a generally rounded body shape to minimize the escape of body heat.

The bobcat is a medium-sized North American cat that first appeared during the Irvingtonian stage around 1.8 million years ago (AEO). Containing two recognized subspecies, it ranges from southern Canada to central Mexico, including most of the contiguous United States. The bobcat is an adaptable predator that inhabits wooded areas, as well as semidesert, urban edge, forest edge, and swampland environments.

It remains in some of its original range, but populations are vulnerable to local extinction (“extirpation”) by coyotes and domestic animals. With a gray to brown coat, whiskered face, and black-tufted ears, the bobcat resembles the other species of the midsized genus Lynx. It is smaller on average than the Canada lynx, with which it shares parts of its range, but is about twice as large as the domestic cat. It has distinctive black bars on its forelegs and a black-tipped, stubby (or “bobbed”) tail, from which it derives its name.

Snow Animals: Liz Bonnin introduces a cast of charismatic animals to reveal the remarkable strategies they use to survive, and even thrive, in winter.