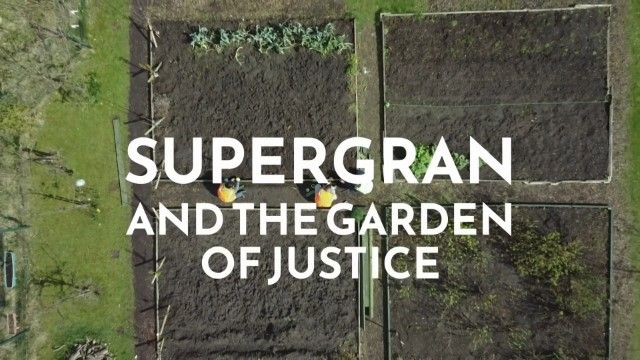 Supergran and the Garden of Justice

Supergran and the Garden of Justice: Welcome to the inspiring world of Dena Murphy and a charity-run vegetable allotment in Manchester, where everyone gets a second chance.

Our Lives follows Dena, a wise-cracking 93-year-old helping young offenders back onto the straight and narrow by supervising them as they serve court-appointed hours on an allotment in Manchester as part of a Community Payback scheme. The scheme sends suitable offenders to the allotment, where they will work off their court-allocated hours. Dena uses the time as an opportunity to make a difference in their lives, to encourage them to take a different path towards being a valuable member of society. But ultimately it’s up to the ‘paybacker’ whether they want to change or not – and Dena knows she can’t win every time.

Filmed across six Saturdays in spring 2022, the film follows Dena, her right-hand man (and the scheme’s supervisor) Richard, and one of their new recruits. Aged just 19, this new recruit admits he has made mistakes in the past. He struggles to engage with the scheme, is late and fails to turn up a couple of times. But Dena and Richard are patient and determined to help him get on the straight and narrow, with Dena providing the encouragement and Richard some career advice. Will they succeed in getting through to him?

Supergran and the Garden of Justice

If anyone deserved a moment of sheer joy today it was the evergreen Dena Murphy. The 92-year-old great grandmother and community hero has helped hundreds of young offenders get their lives back on track thanks to her allotment. Dena, a former Royal Horticultural Society gold medal winner, has dedicated her life to helping people. She worked as a nurse from 1946 in the first NHS Hospital – Trafford General – before turning her hobby of gardening into a charitable endeavour.

As a former nurse Dena more than knows the value of hearty eating and is such a firm believer in wholesome food, she even created a ‘Manchester Menu’ for older people last year, which involves a simple soup that can also be a casserole.

Title
Supergran and the Garden of Justice
Description

Supergran and the Garden of Justice: Welcome to the inspiring world of Dena Murphy and a charity-run vegetable allotment in Manchester