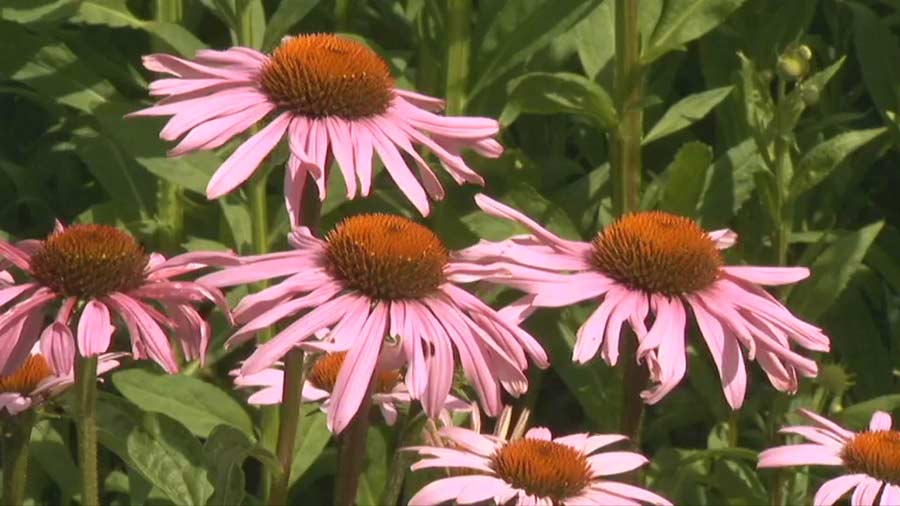 The A to Z of TV Gardening - Letter E

The A to Z of TV Gardening – Letter E: Carol Kirkwood takes an alphabetical journey through the world of television gardening, getting inspiration and advice from some of the BBC’s most popular gardening presenters and programmes.

In this episode, she explores subjects that all begin with the letter E: Euphorbia, Eucalyptus, Echinacea.

The A to Z of TV Gardening – Letter E

Euphorbia is a very large and diverse genus of flowering plants, commonly called spurge, in the spurge family. “Euphorbia” is sometimes used in ordinary English to collectively refer to all members of Euphorbiaceae (in deference to the type genus), not just to members of the genus. Some euphorbias are commercially widely available, such as poinsettias at Christmas. Some are commonly cultivated as ornamentals, or collected and highly valued for the aesthetic appearance of their unique floral structures, such as the crown of thorns plant.

They are from the deserts of Southern Africa and Madagascar have evolved physical characteristics and forms similar to cacti of North and South America, so they (along with various other kinds of plants) are often incorrectly referred to as cacti. Some are used as ornamentals in landscaping, because of beautiful or striking overall forms, and drought and heat tolerance.

Eucalyptus is a genus of over seven hundred species of flowering trees, shrubs or mallees in the myrtle family, Myrtaceae. Along with other genera in the tribe Eucalypteae, they are commonly known as eucalypts. Plants in the genus Eucalyptus have bark that is either smooth, fibrous, hard or stringy, leaves with oil glands, and sepals and petals that are fused to form a “cap” or operculum over the stamens. The fruit is a woody capsule commonly referred to as a “gumnut”.

Most species of Eucalyptus are native to Australia, and every state and territory has representative species. About three-quarters of Australian forests are eucalypt forests. Wildfire is a feature of the Australian landscape and many eucalypt species are adapted to fire, and resprout after fire or have seeds which survive fire.

Echinacea is a genus, or group of herbaceous flowering plants in the daisy family. The genus Echinacea has ten species, which are commonly called coneflowers. They are found only in eastern and central North America, where they grow in moist to dry prairies and open wooded areas. They have large, showy heads of composite flowers, blooming from early to late summer. The generic name is derived from the Greek word ekhinos, meaning “sea urchin”, due to the spiny central disk. These flowering plants and their parts have different uses. Some species are cultivated in gardens for their showy flowers. Echinacea purpurea is used in folk medicine. Two of the species, E. tennesseensis and E. laevigata, are listed in the United States as endangered species.

Title
The A to Z of TV Gardening - Letter E
Description

The A to Z of TV Gardening - Letter E: In this episode, she explores subjects that all begin with the letter E: Euphorbia, Eucalyptus, Echinacea.

Tags: Echinacea., Eucalyptus, Euphorbia, garden, gardening, The A to Z of TV Gardening