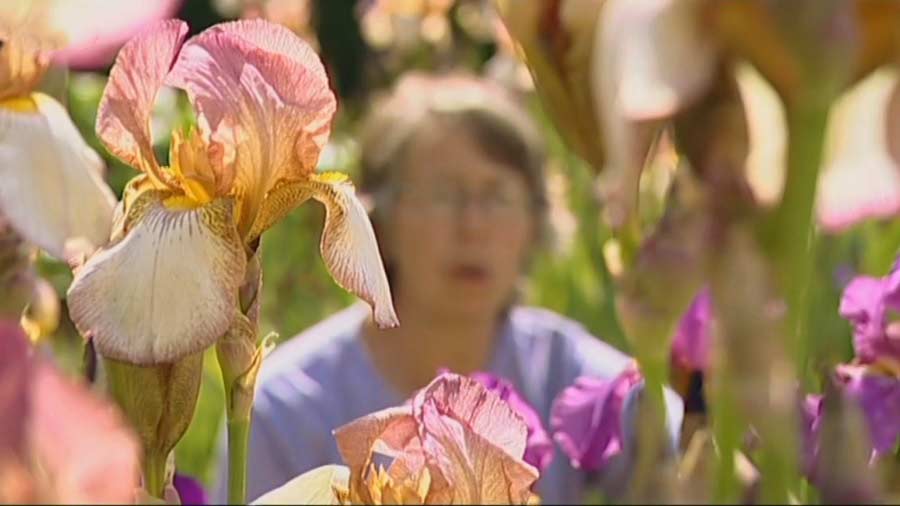 The A to Z of TV Gardening - Letter I

The A to Z of TV Gardening – Letter I: Carol Kirkwood takes an alphabetical journey through the world of gardening, getting inspiration and advice from some of the BBC’s most popular garden presenters and programmes.

In this episode, ‘I’ is for insects, iris and ivy. We bask in the beauty of butterflies while commiserating with Joe Swift over the insects that are eating their way through his allotment.

Iris is a genus of 260–300 species of flowering plants with showy flowers. It takes its name from the Greek word for a rainbow, which is also the name for the Greek goddess of the rainbow, Iris. Some authors state that the name refers to the wide variety of flower colors found among the many species. As well as being the scientific name, iris is also widely used as a common name for all Iris species, as well as some belonging to other closely related genera. A common name for some species is ‘flags’, while the plants of the subgenus Scorpiris are widely known as ‘junos’, particularly in horticulture. It is a popular garden flower.

The often-segregated, monotypic genera Belamcanda (blackberry lily, I. domestica), Hermodactylus (snake’s head iris, I. tuberosa), and Pardanthopsis (vesper iris, I. dichotoma) are currently included in Iris. Three Iris varieties are used in the Iris flower data set outlined by Ronald Fisher in his 1936 paper The use of multiple measurements in taxonomic problems as an example of linear discriminant analysis.

Hedera, commonly called ivy (plural ivies), is a genus of 12–15 species of evergreen climbing or ground-creeping woody plants in the family Araliaceae, native to western, central and southern Europe, Macaronesia, northwestern Africa and across central-southern Asia east to Japan and Taiwan.

On level ground they remain creeping, not exceeding 5–20 cm height, but on suitable surfaces for climbing, including trees, natural rock outcrops or man-made structures such as quarry rock faces or built masonry and wooden structures, they can climb to at least 30 m above the ground.

Ivies have two leaf types, with palmately lobed juvenile leaves on creeping and climbing stems and unlobed cordate adult leaves on fertile flowering stems exposed to full sun, usually high in the crowns of trees or the tops of rock faces, from 2 m or more above ground. The juvenile and adult shoots also differ, the former being slender, flexible and scrambling or climbing with small aerial roots to affix the shoot to the substrate (rock or tree bark), the latter thicker, self-supporting and without roots.

Title
The A to Z of TV Gardening - Letter I
Description

In this episode, 'I' is for insects, iris and ivy. We bask in the beauty of butterflies while commiserating with Joe Swift

Tags: garden, gardening, insects, iris, ivy, The A to Z of TV Gardening