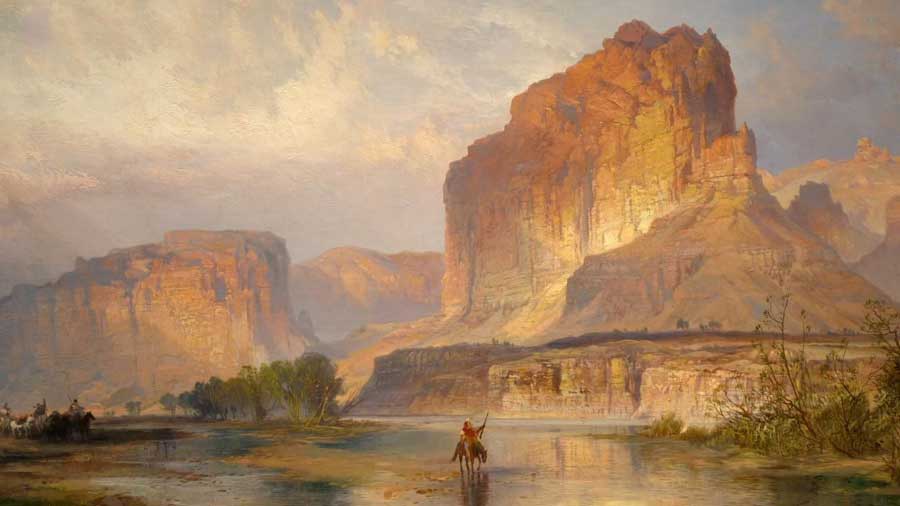 Big Sky, Big Dreams, Big Art: Made in the USA episode 1 : Series looking at American art. The first episode is set in the Wild West and begins with the sublime art of the Hudson River School, whose 19th-century evocations of the vastness of America did so much to fuel the myth of the promised land. A history of American art with Waldemar Januszczak.

Another huge influence was the mysterious rock art of Native Americans, which set a stirring precedent for non-naturalistic painting. The film culminates in a celebration of Jackson Pollock, born in Cody, Wyoming, who arrived in New York wearing a Stetson and cowboy boots, and whose famous drip paintings were influenced heavily by both the moods of the American west and the example of Native American artists.

The Hudson River School was a mid-19th century American art movement embodied by a group of landscape painters whose aesthetic vision was influenced by Romanticism. The paintings typically depict the Hudson River Valley and the surrounding area, including the Catskill, Adirondack, and White Mountains. Works by the second generation of artists associated with the school expanded to include other locales in New England, the Maritimes, the American West, and South America.

The name Hudson River School is thought to have been coined by New York Tribune art critic Clarence Cook or by landscape painter Homer Dodge Martin. It was initially used disparagingly, as the style had gone out of favor after the plein-air Barbizon School had come into vogue among American patrons and collectors.

Hudson River School paintings reflect three themes of America in the 19th century: discovery, exploration, and settlement. They also depict the American landscape as a pastoral setting, where human beings and nature coexist peacefully. Hudson River School landscapes are characterized by their realistic, detailed, and sometimes idealized portrayal of nature, often juxtaposing peaceful agriculture and the remaining wilderness which was fast disappearing from the Hudson Valley just as it was coming to be appreciated for its qualities of ruggedness and sublimity. In general, Hudson River School artists believed that nature in the form of the American landscape was a reflection of God, though they varied in the depth of their religious conviction. They were inspired by European masters such as Claude Lorrain, John Constable, and J. M. W. Turner. Several painters were members of the Düsseldorf school of painting, others were educated by German Paul Weber.

Big Sky, Big Dreams, Big Art: Made in the USA: The first episode is set in the Wild West and begins with the sublime art of the Hudson River School.