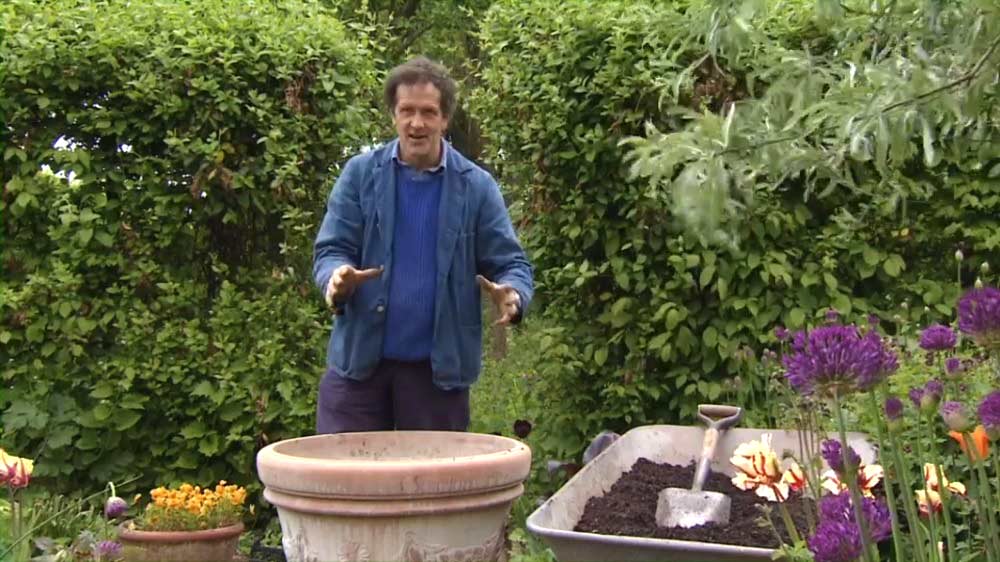 Gardeners’ World episode 11 2013: Monty Don plants up summer bedding in the Jewel Garden and starts a new tomato experiment, while Carol Klein celebrates the blossom at Batsford Arboretum in the Cotswolds.

Virus diseases in cannas are now widespread, affecting plants in stocks around the world. Symptoms of canna virus vary from plant to plant, causing streaking and mottling on the leaves, loss of vigour and occasional breaks of colour in flowers. As the season progresses, streaks worsen and leaves become ragged with holes, a great shame when these plants are chosen for their lush foliage.

To reduce the chances of bringing this disease into your garden, where it can spread easily to healthy plants, avoid buying dormant rhizomes and always check the foliage of new plants for signs of disease. This can be confusing with varieties that have patterned leaves but err on the side of caution: never buy unhealthy looking plants and dispose of any stock as soon as you see signs of unwanted streaking. When handling your cannas, it’s also a good idea to sterilize your tools between plants to avoid spreading the disease.

If you’ve taken basal cuttings such as dahlias or delphiniums, check them regularly for signs of growth. If you see strong new roots, it’s time to pot them on. Remove them carefully and pot up each cutting individually into fresh, free-draining compost. Water them and place them in a protected place to grow on and they’ll be ready to plant out at the end of summer.

Many climbers such as late-flowering clematis grow very fast at this time of year and it’s important to keep them untangled and tied where you want them to be. This way, when they flower, they’ll be looking their best. Use soft twine so you don’t damage the stems and tie them gently against their supports.

Potatoes that were planted a month or so ago will be breaking the surface of the soil so now is a good time to earth them up. Drawing earth up over the top of the foliage will protect it from a late frost. Ensuring tubers are sufficiently buried when they form, prevents them being exposed to light and becoming poisonous. Finally, keeping tubers well covered can also reduce the risk of them being affected by blight if plants succumb to the disease later in the year.