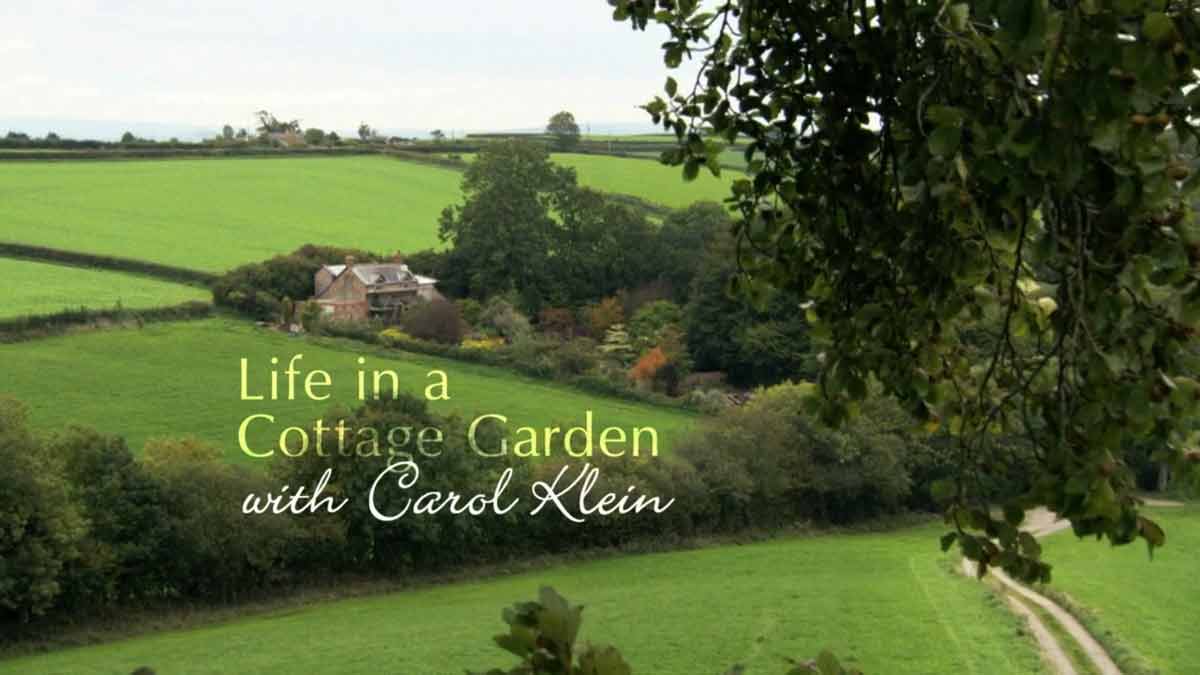 Life in a Cottage Garden with Carol Kleine episode 1 - Winter

Life in a Cottage Garden with Carol Kleine episode 1 – Winter has come… harsh frosts have shattered Carol’s tulip pots, and her brick paths are ruined. Carol takes shelter in the potting shed and prepares her garlic for spring planting. On finer days, she begins pruning late-flowering clematis, and when the thaw comes she begins a major re-vamp in the borders.

As the long dark days pass, the first green shoots of the new year appear. First it is snowdrops in ones and twos, and then in drifts, carpeting the woodland floor. These are then followed by jewel-like hellebores. As winter slides into February, and whilst the trees and shrubs are still in their dormancy, a local woodsman arrives to lay Carol’s native hedge.

Life in a Cottage Garden with Carol Kleine is a series following a year in Carol Klein’s garden at Glebe Cottage in north Devon.

In this new series plantswoman Carol Klein shares with us a year in her garden at Glebe Cottage in north Devon. Carol has looked after her garden for over 30 years, and each year brings with it its own rewards and delights, as well as problems and challenges. Follow Carol as her garden grows, flourishes, dies and is reborn.

The first episode covers January and February. The frosts have not yet released their grip on the garden, and the devastation of a hard winter is scattered all around. There is much to do – cutting back, preparing the soil and garlic planting. The first green shoots of the year begin to appear, as drifts of snowdrops carpet the woodland floor and hellebores reveal their ravishing colours. A local woodsman joins Carol to lay a native hedge. Slowly the first signs of spring appear.

Life in a Cottage Garden with Carol Kleine episode 1 – Winter

Hedgerows provide food and shelter for many mammals, birds and insects. A native ‘species-rich’ hedge in a garden can do much to benefit wildlife. Apart from keeping animals in and marking boundaries, native hedges lend our landscapes their unique identity and can be thousands of years old. Maintenance is vital in sustaining this richness, and the art of hedge laying remains an important rural skill today.

The Winter Solstice, the shortest day of the year, is traditionally the time of year for planting out garlic. But Carol never does that; her ground is too heavy and wet. She starts hers off in modules under cover and that way, when planted out in spring, they’re off to a flying start.

Holly – Life in a Cottage Garden

A holly tree in winter provides us with berries to deck our halls, but more importantly, it provides nutritious food for wildlife. Carol’s native hedge contains all sorts of native species but not a holly. By collecting a few berries from the hedgerow, stratifying them in a fridge for a couple of weeks to break dormancy, then sowing them into pots should, in a couple of seasons, provide Carol with nice little trees, which she can then plant out into her own native hedge.

Sometimes the garden, or a part of the garden, becomes choked and overgrown; lifting and dividing a few plants is not going to sort it – it’s time to roll up your sleeves. Providing the weather is on your side, late winter is a good time to begin a rejuvenation project. Plants are dormant, you can see what you are doing, and the soil can be dug and improved without causing damage to surrounding areas.

For Carol, lifting out her herbaceous plants allowed her to divide and rejuvenate many favourite plants; it can also offer the opportunity to reassess ideas about design. So, if it’s freezing outside and you want to get enthusiastic about your garden, the link below will take you to great ideas on gardening styles and design.

Life in a Cottage Garden with Carol Kleine episode 1 - Winter has come... frosts have shattered Carol's tulip pots, and brick paths are ruined